We are so grateful for the support you have shown to us in the short time in which we have been partners. As we write this letter, it has been just over a year since the last time we visited your church body. With each successive interaction we have had with Pastor Gorman and Pastor Willcox, as well as our interactions with each one of you, we have always been encouraged. We hope that this information will help you know us better since we have only had a few quick visits with your congregation. 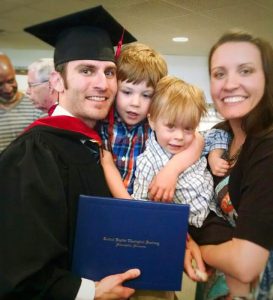 We both were saved by the grace of God at early ages and were raised in gospel-preaching churches. We were called to missions at different times in our lives before we met, but the Lord brought us together in 2006 and focused our attention, as a couple, on Austria. We are both graduates of Moody Bible Institute (Danielle ’05, Bobby ’06).

Danielle had a burden for missions as a young girl when she heard a sermon on Romans 10:12-15. Starting in 2000, she participated in a handful of short-term mission trips to the Czech Republic. She did a summer-long internship through Greater Europe Mission in Austria and Romania in 2005, where she felt a burden for the people of Austria: a land with such little gospel presence and activity. This is how we were first introduced to Austria.

We were married in 2006, and in 2007 we joined Greater Europe Mission as a couple. In 2008 we committed a year to exploring missions in Austria together. During this time, we saw the need for gospel-centered, theologically-minded, and expository preaching church planting endeavors and started making preparations to return full-time.

In 2010 we joined a year and a half old church planting ministry near us in Lakeville, Minnesota, and in 2011 Bobby entered seminary. For three years we were being trained in the local church for church planting ministry, and Bobby completed his Masters of Divinity in 2015. During this time of seminary, God blessed us with two boys: Gideon was born in 2010 and Ezra in 2013. 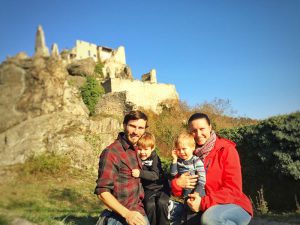 We returned to Vienna in August of 2015 and have focused our time since then in language acquisition and cultural adaptation. As directed by our mission organization our official ministry roles have been limited during this initial phase of settling, but we still have had many opportunities to share the gospel with those around us.

We are currently members at an evangelical church in a suburb of Vienna called Klosterneuburg. We are learning from them what ministry in Austria is really like. They are a young church, only 3 years old, so we hope to invest in them and build them up through evangelism and discipleship. Our goals in the years to come are: to begin planting gospel-centered, theologically-grounded, expository preaching churches in this land.

As for now we continue to adapt to the culture, learn the language, attempt to be good neighbors, practice hospitality, and share the gospel when there are opportunities. Thank you for partnering with us!!! We look forward to the day we can see you all again in person.